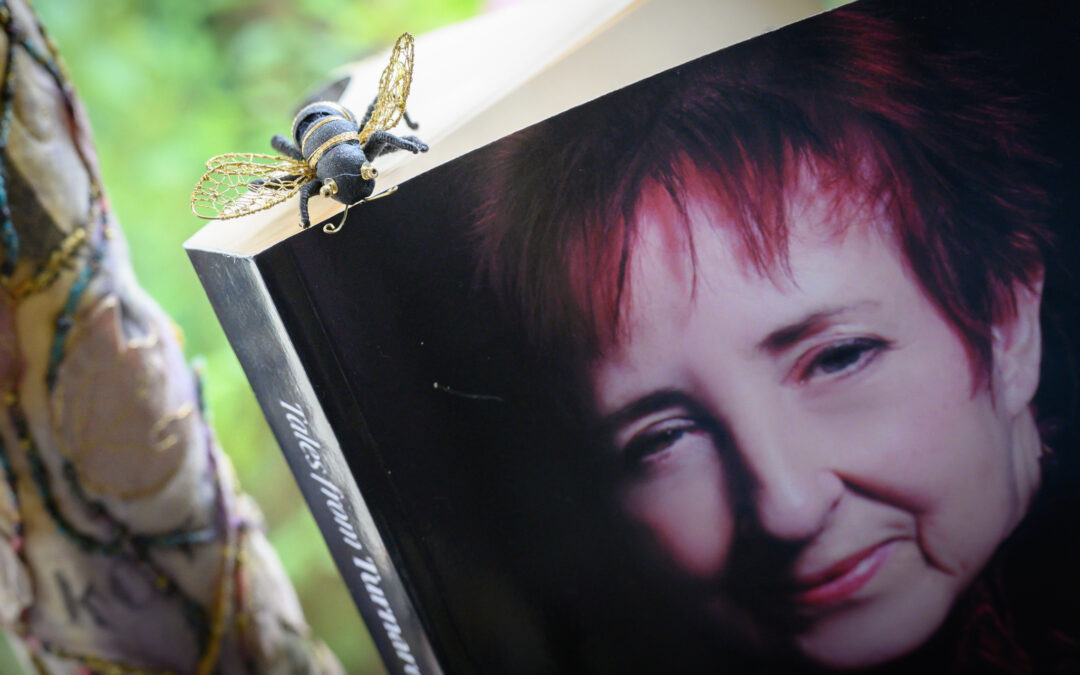 I think that I will have to cease putting out this collection of memoirs.

I am sad to do so in many ways and I am grateful from the depth of my heart to all the lovely friends—and strangers—who have read and commented on them (after all, a stranger is only a friend you haven’t met yet!)

There are, of course, lots of things I haven’t included. I think I need to give it—and you—a rest for a while. Please feel free to text me, chat online with me, or make contact however you wish. This way of sharing has been a very uplifting experience for me.

It seems appropriate to end, for the moment anyway, with these notes about STORYTELLING. I came to it as a defined hobby in the ’90s. I had to give a talk in Armenia about my work as a child psychiatrist, in which I had devised my own therapeutic methods of using stories. At around the same time, I had discovered the friendship of a wonderful group of professional storytellers, notably Richard Berry, Cath Little, and the Cardiff Storytelling Circle.

The Wonderful Therapeutic Power of Storytelling

I will include in this fairy tales, myths, wonder tales, jokes, and many other narratives. They can be old and traditional or freshly minted and written down later—but all must be TOLD in some way eventually. The story demands it—and you can’t keep a good story down!

EVERYBODY is ‘telling stories’ all the time—we are telling others what we have been doing, incidents, ideas, and longings. When we structure the narratives and the chit-chat of our lives, it becomes a story, long or short, entertaining or boring, happy or sad, true or completely made up!

So, when we turn to look more closely at the stories we tell others or are told, here’s a thing to note. Even when they are about ‘other people’, the tale and the descriptions have come from our minds, so they are also ‘us’, whether we like to acknowledge them or not.

Like dreams, all the characters in a story can be ‘read’ as aspects of one person. This applies to the place, atmosphere, animals, objects as well. This is very similar to dreams and cultural stories, which have been described sometimes as ‘collective dreaming’. In the same way, all the characters can represent aspects of a whole society; stock types and stereotypical characters are common and this is not accidental.

Structured stories have certain characteristics, almost rules. For example, the ‘happy ending’, usually a wedding, so often present in fairy tales can stand for the integration of the divided personality, maturity, and individuation, and is a powerful symbol. Worries have been expressed that it ‘gives children the wrong idea about marriage’, but I think these are misplaced.

I could have written much more about this, but others have already done so. Here are just a few—I hope helpful—notes breaking down the practical use of stories, especially traditional wisdom tales and fairy stories.

These are some of the reasons why they can be so useful therapeutically, without the recipients even being aware of the medicine, so sweetly it slips down!

a) Stories can be used by the listener to make sense of events crises and emotions. They can create order in disorderly thoughts and messy or unacceptable emotions.

b) By exteriorising the inner life in telling, creating, or listening to a story, trauma and challenge can be more easily understood, digested, and coped with.

c) Order is imposed on disorder, often by an unexpected twist—lateral thinking and unusual solutions can be encouraged by example. It gives us ideas about looking afresh at mundane human problems.

d) General thinking ability is improved by practice, in a pleasurable way.

a) Some stories have a clear didactic and teaching role. This is rather frowned on now by some people, but children, and often adults, can find this reassuring, educative and fun, and such material has a useful place in therapy and education (see 9).

b) Encouragement of creativity

c) Alternative endings can be imagined and played with creatively.

By this, I mean that subjects that are often taboo or disapproved of in a culture can be explored in metaphor by a story.

a) This can be enough in itself, or it can lead into actual therapy by someone trained, since forbidden and dark material is given safe, contained expression in an orderly framework.

b) Ambivalence is particularly hard for individuals to cope with. By dividing up the roles in a narrative, there is a timeframe to resolve them. Examples are the division of the good mother (often dead) and the evil stepmother. Feelings of mixed love and jealousy for siblings often find expression during the story by the differing fates of three brothers or sisters.

a) Repetition can lead to desensitisation of painful material. Stories often include stock repetitions, often both by teller and audience.

b) Stories were often accompanied or took place during textile work—sewing, weaving, spinning. These may have had an effect similar to Eye Movement Desensitisation Therapy. This as a whole area in itself, which I have explored elsewhere

c) Some stories have a somewhat bleak, but often reassuring, subliminal message: “That’s just the way it is”. This can reduce the guilt of imagined responsibility often felt by the hearer about his/her own life. Mothers die. Ogres eat children. Life’s like that. Shit happens.

Similar to 4, but very much a function of bedtime stories: to soothe, reassure and induce a warm, safe feeling with which to go to sleep or to face a new situation.

a) A very useful way for children to try out all sorts of different ways of being and thinking. A useful exercise is to act a brief traditional play several times with each role in turn, or to rewrite it from the point of view of a minor character or villain.

b) Similarly, adults can enjoy identifying with characters that represent suppressed or unacknowledged parts of themselves in a safely contained way, discussing, acting, or writing about them. Again, villainous and horrible people are necessary in stories to explore the dark or shadow side of life.

a) Many stories depend on cooperation, kindness, and compassion for their safe resolution. This is sometimes an open message, sometimes concealed. Sharing and negotiating can be further encouraged by listening to and acting out traditional stories.

b) Those who feel most alienated and have most difficulty cooperating in society would be likely to be strongly affected by this message. They will have seen much—both in personal experience and popular culture—that runs directly counter to it. It could be a particularly useful element of stories on which to focus, indirectly leading to a discussion with adults or children.

a) Stories stretch the imagination and often have a message that success can come to the weakest and smallest member of society.

b) By learning to join in, firstly with repetitions, then encouragement to tell, the individual can develop confidence in their speaking out, their unique voice, and their ability to get others to listen. Again, equally important for adults and children.

9. Passing on the culture

a) This has always been an important part of storytelling in oral cultures. It still takes place, not least by the development of urban myths and reworkings of old tales to give them a modern twist.

10. Speaking to the heart

Above all, stories are used for:

The power of stories—images, metaphors, pictures, and branching narratives—are created in the mind. They are part of the ordinary interchanges of everyday life; your story versus my story should result in a creative synthesis, but too often can become a power struggle.

When I used to speak to an audience of health professionals, I would emphasise the following: it is more important that you acknowledge in your hearts the power of stories and recognise that you are using them all the time than that you learn my way of using formal storytelling with patients. I want you to use the ordinary stories in your day to enrich and empower people. My clinical material can only faintly reflect what you can bring.

In the place between the storyteller and the listener, between the singer and the audience, is the ‘sacred space’. It is given other names, but it is an essential part of attentive and creative interplay between people.

This ‘space’ is there between the therapist and the patient. The therapist’s words and silences and the attentiveness or even the disinterest apparently shown by the patient, create something new, with much potential. The use of traditional story motifs is a valuable adjunct to cognitive models because the symbols pack a punch beyond their smooth-seeming surface. Jung has shown how a whole story (a narrative) can be condensed into a single scene or symbol, compressing and increasing its power.

So, we must be aware of what we are doing and its potential also for harm, but not be too alarmed by it. Cultures are awash with stories and healthy children pick and choose and are immunised by some exposures, warned by others, and enchanted by many.

Those whose experiences in childhood are particularly brutal, in any sense of the word, may have difficulty disentangling themselves from their inner narrative or may use the powers it gives them in unhealthy and destructive ways on others. The use of stories gives them safe spaces in the mind and heart, where they can begin to heal at their own pace.

Finally, here are a few tips to help those who may be less used to telling stories to others, whether individuals or a group.

Firstly it’s FUN! Just do it!!

Start with a simple story or something true that happened to you or your family.

Don’t ever be tempted to read your story out loud instead of telling it. If you are worried, have a few key words written on a little card to check, or do a small drawing, like a map, as a reminder before you start.

Take any opportunity to practice your story on anyone you can capture for a few minutes!

If you forget where you are while you are telling the story, don’t panic. Say you’ve got lost and ask the audience to remind you what it was you were just saying.

Some of these stories are very well known, but none the worse for that. If a child—or an adult come to that—calls out that they know it, don’t worry, get the audience to help you tell it.

HAPPY STORYTELLING—AND LISTENING! We have two ears and one mouth—the proportion for stories is about right—but you will find it hard to stop me!