The Boy and the Beautiful Blanket 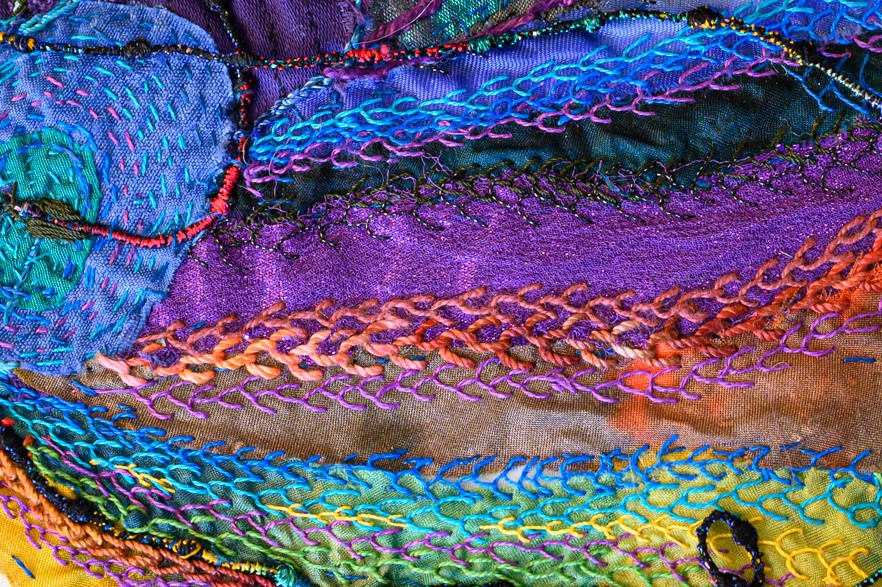 Here is an original fairy tale that I wrote. Once again, the inspiration was a brief mention in a folk tale, explaining why the sun sometimes sets with bright colours around it, which captured my imagination. Storytellers have a reputation for pinching and stealing threads and patches from other people’s garments—or even the whole garment—and making it over to fit themselves. And why not?

So, cosy up by the fire, hug a rug around you, and listen to my story of…

The Boy and the Beautiful Blanket

Once upon a time, there was a young man, hardly more than a boy, who lived with his grandmother in a hut at the edge of the forest. Until a few years earlier, his mother and father had been with them too. Although life was hard, the house then was full of love and laughter, with sunshine in summer and a warm fire in winter, and they had slept beside it on the hearth, where the boy was held closely by his parents against the cold.

Then, one bitterly cold winter’s day, his mother and father had gone out to forage and had never returned. The boy and his grandmother were cold and hungry, but with a little help from the nearest village and his grandmother’s skills, they got by. The boy remembered how his father had built up a warm fire and his grandmother taught him to make soup. She began to weave a beautiful blanket to keep the boy warm. She used everything she could find, wool from the sheep, dyed in rainbow colours, feathers left by birds: robin redbreast, goldfinch, and blue jay. She wove in the colours of flowers and the magic of her love for her grandson. At last, it was finished and he wrapped it round himself, and at last he could sleep, warm and comforted.

So time went on and they did well, until one day, the unthinkable happened and grandmother went out into the forest and she also did not come back. The boy waited, one day, two days, and on the third day he knew she was not coming back and he must go and find her. All he could find to take to sustain him was the crust of the last loaf, the last berries from the tree, the last gourd of wine, and the blanket woven years before by his grandmother, now alas, old and dull in colour, worn threadbare, full of gaping tears and holes, so it barely protected him from the freezing wind and snow.

Soon he began to feel hungry and he was about to eat the berries when a robin redbreast fluttered down at his feet, exhausted, looking up at him beseechingly, unable even to chirrup. He could not help but feed the bird on half of the berries, but when those were gone it still looked at him so pleadingly that he gave it the rest and watched as the little bird flew unsteadily, but noticeably stronger, back into the trees.

He went a little further, then stopped, intending to eat the crust, but again he was interrupted by a little creature looking down at him beseechingly from a low branch. It was a red squirrel and he willingly gave it half of his crust. The squirrel too looked near to death, but began to recover, still looking so hungry that, with a sigh, he gave it the rest of his bread.

The snow had stopped and by now he was far, far into the forest, in a part he had never seen before, completely lost. He wondered if it might be best to drink from the gourd and perhaps lie down in the snow and sleep, even though he knew he would be unlikely to wake. As he sat down, wrapping his useless shawl more firmly around his shoulders and weighing the gourd in his hand, he became aware of a figure seated nearby, shrouded in a black cloak. He was startled and exclaimed in surprise, dropping then catching the gourd.

“Young man!” said a low, sweet voice and he realised that it was a woman. As she slid back the edge of the cloak a little, he saw part of a face of startling beauty, radiating golden light and heat, so that the snow around him began to melt and he to blink. At this, she closed the cloak a little but spoke again.

“I am the Sun!” she said, “as you may have guessed. I am hiding from my evil cousin, the Moon, who forbids me from entering these woods by night, claiming them as her own. Don’t be afraid, I will not open my cloak any further to harm you, only enough to prevent you from freezing to death.”

The boy stammered his gratitude and she continued.

“I would dearly like a little of your wine, young man, if you so please?”

Mesmerised, he handed her the gourd and she drank a full half of it and sighed deeply as she handed it back. A shadow passed over them and they looked up. The silver Moon was peering down as she passed, riding a black cloud. The Sun shrank back into her cloak and covered her own face, just in time, as the round sneering face of the Moon passed overhead, looking down into every nook and cranny of the forest, but not seeing them.

The boy looked down at the gourd. There was hardly enough to slake his thirst or give him sleep now, anyway. He looked back at the Sun lady and held it out, “Have what you want,” he said simply.” I’m used to going hungry and thirsty, my lady, not like yourself.”

The Sun thanked him and drank the rest. Then she said, “I owe you a good turn. What about your blanket. Is that all you have to keep away the cold this snowy night?”

He laughed awkwardly, ”It was once the most beautiful, warm blanket in the world, my lady, made by my grandmother, but now worn and torn and full of holes.”

He handed it to her, and she held it up in her own light and said, “Then I must mend it for you!”

She gave a little call, like squirrels chatter, and suddenly the clearing was full of squirrels. The boy thought he could see they were being led by the one he had helped, but before he could be certain, the Sun had given her orders and they all whisked away returning with wonderful threads and furs of many different colours. Her hands came out of the cloak to give signs of what she wanted and as she made weaving motions the thread swiftly mended and remade the blanket without her touching it.

The boy noticed that each of the lady’s fingers ended in a flame and he realised how skillfully she worked, so that she set nothing alight. She gave a chirruping call and suddenly the clearing was full of birds, each giving their brightest feathers to be woven in and add to the glory of the colour, the robin redbreast—who caressed his cheek in passing—the goldfinch, the blue jay, and many others

Then suddenly the work was done and the birds and animals vanished. He was aware that somehow the Sun was wrapping him in his beautiful renewed blanket without touching him and he felt very sleepy.

The Sun said, “I know where your parents and grandmother are. The Moon stole them and has them locked up in a place far, far from here, on the other side of the forest.”

The boy struggled to stay awake long enough to look round the clearing and see that there were no paths nor anything to identify the way. Then he became aware of what the Sun was saying, as he sank into sleep.

“Because you gave away everything you had in the whole world, without thought of yourself, you have nothing ever again to fear. Sleep now! And in the morning you will see what you will see.”

The boy woke in the morning. He was still wrapped in the glorious rewoven blanket so he knew it was not a dream. The lady in the cloak had gone, but the Sun in the sky was beaming down over the forest, making the snow glitter and the Moon had set.

As he got to his feet, he saw that where there had been close clumped trees there was now a broad grassy path, straight and true, with the snow packed up the sides and the grass at the edges just a little charred. One way he could see almost far enough to know that it would take him home, but facing the other way – Ah! That was better than best! Along it, hand-in-hand were walking swiftly his mother and father, with his grandmother close behind. And what a meeting and greeting there was indeed!

They walked back to the cottage to make a feast—out of nothing! Then neighbours caught sight of them, having been looking out, running towards them with joyful shouts, bringing food and gifts. There was a great celebration.

As the Sun sank nearer the horizon, the boy took his blanket and slipped out to the edge of the forest. He remembered what the Sun had murmured to him as he slipped into sleep. Something about being where you had nothing and still gave away whatever you had. She had restored his beautiful blanket, so he had something after all. He raised his arms impulsively towards the sky and called out,

”I do have something now and you restored something even better as well. So this is for you, my lady!”

He threw the blanket up and a warm wind swirled around him, caressing his cheek and lifting his hair up, indeed singeing the tips very slightly as it passed. It carried the beautiful rainbow coloured blanket up, up into the sky, as the Sun accepted his gift.

So that is why, often at sunset and sunrise, when the Sun has escaped from the confines of the Moon’s domain, she wraps herself in her glorious coloured blanket and dances and rolls around the sky till the whole horizon is covered in a blaze of glory. And in the forest, the small ones, the birds and squirrels, look up and wave and talk gratefully of anyone who helps them in bad times, so that everyone can live…